I’ve just come to the end of a sketchbook that I’ve kept for the last 18 months, so thought I’d post a few pages here. Ironically, when I was in the thick of being a children’s illustrator, I didn’t keep sketchbooks – the last thing I needed in my spare time was to be drawing. I had to rest my overstretched tendons and tunnels (I had recurring RSI). In recent years I’ve started to carry one around with me again. I’ve also included some pages from other sketchbooks – I have them of varying sizes from a tiny one that fits in my purse to an A4 book at home in which I do comics workings-out.

I don’t often attempt to do finished drawings in them – they’re more for practising looking, and planning (comics). I like to draw in cafes, on journeys, on beaches, and in waiting rooms etc. In these situations, people are in varying degrees of motion, which means fast drawing is required to get any sense of form. I like that challenge, and the results are very gestural lines – mere essence of movement or character.

My reasons for sketching are varied, and include: taking the opportunity to practise drawing when I’m not doing anything else; an attempt to be ‘in the moment’ and record it for posterity; on occasion, to escape from the moment or thoughts, or from boredom; note-taking at talks; and I also sketch in the wee hours when I can’t sleep – this tends to be when comics idea emerge. They can seem very urgent and important in a dozy half-slumber but often appear pretty rubbish later in the day. Like dreams! 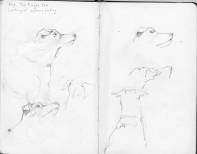 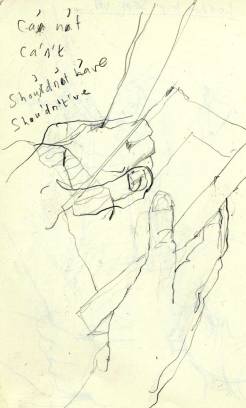 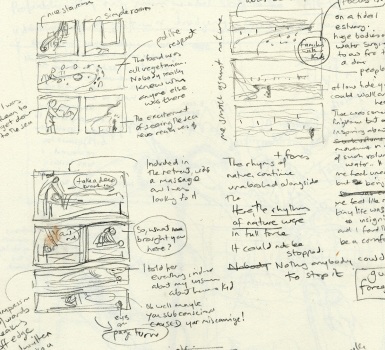